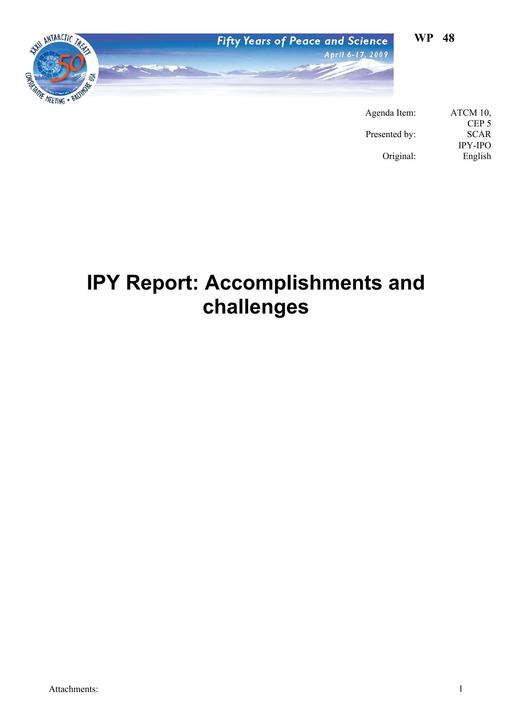 The International Polar Year (IPY) has emerged as the largest internationally coordinated planetary research effort in the past 50 years. It has engaged the intellectual resources of thousands of scientists – many more than expected and often from non-polar countries – representing an unprecedented breadth of specialties, from geophysical to biological to social sciences. IPY has been a truly international, interdisciplinary endeavour with over 160 endorsed science projects involving researchers in more than 60 countries. Substantial new funding – more than USD 400 million – was pledged for IPY, which coordinated with and supplemented ongoing polar research and monitoring programmes. In addition, novel system-level approaches, and observational and analysis technologies, including in-situ and remote sensing, were fundamental features of IPY science. Many IPY projects and their offspring will continue beyond the formal observational period, which ends in March 2009.

The planners of IPY 2007–2008 intended that it would pave the way for a new era of scientific progress in knowledge and understanding of the polar regions, and leave a vital legacy of sustained observing systems, increased international research coordination and collaboration, stronger links between researchers across different disciplinary fields, reference datasets for comparison with the future and the past, development of a new generation of enthused polar researchers, and full engagement and understanding of the public and decision-makers worldwide in the purpose and value of polar research.

This paper looks at the achievements of IPY and provides recommendations for the way forward including a resolution to ensure the IPY legacy.