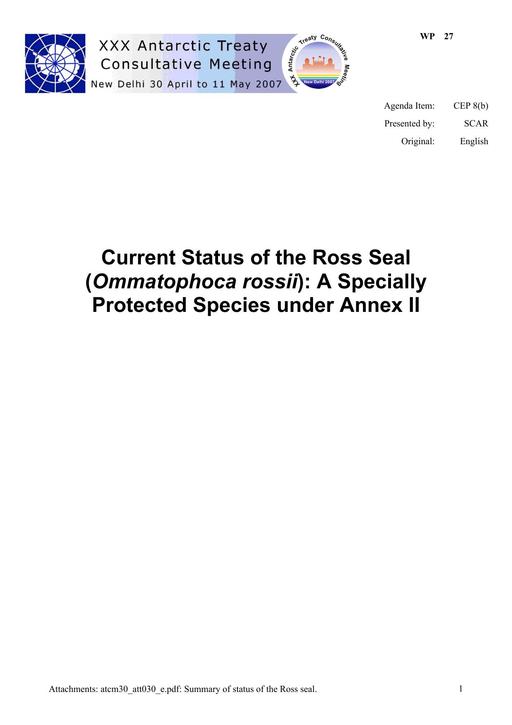 Resolution 2 (1999) of XXIII ATCM requested SCAR, in consultation with the Parties, CCAMLR and other expert bodies as appropriate, to examine the status of the species currently designated in Appendix A of Annex II to the Environmental Protocol, and with the assistance of IUCN, to determine the conservation status of native Antarctic fauna and flora and advise the CEP on which species should remain or be designated as Specially Protected Species.

At XXIII ATCM an Intersessional Contact Group, chaired by Argentina, was established to discuss the criteria that could be used to designate Specially Protected Species. The Final ICG report was presented as XXV ATCM/ WP8. The advice to the ATCM was encapsulated in Resolution 1 (2002), which noted that the CEP had decided to adopt the IUCN criteria on endangerment to establish the degree of threat to species, requested SCAR to assist in reviewing those species which were classed as "vulnerable", "endangered" or "critically endangered" (taking into consideration regional assessments of populations), as well as reviewing those species classed as "data deficient" or "near threatened" which occurred in the Antarctic Treaty Area.

Working Paper XXVIII ATCM WP34 proposed how the IUCN criteria could be applied to Antarctic species. At XXIX ATCM SCAR tabled WP39 proposing that, on this basis and on the grounds of the presently available population data, Antarctic Fur Seals (Arctocephalus spp.) should be delisted as Specially Protected Species. Measure 4 (2006) recommended that the words “All species of the genus Arctocephalus, Fur Seals” be deleted from Appendix A to Annex II to the Protocol on Environmental Protection, and this Measure was adopted by the Parties. Measure 4 noted that the Ross Seal (Ommatophoca rossii) remains a Specially Protected Species. This leaves the Ross seal as the only species currently afforded Special Protection under Annex II to the Protocol on Environmental Protection.

In keeping with Resolution 2 (1999) of XXIII ATCM, SCAR here presents currently available population data on the Ross seal to enable its status as a Specially Protected Species to be re-examined. In summary, SCAR recommends that the status of the Ross seal remain unchanged. This recommendation is made on the basis of the available data and the IUCN criteria, and in keeping with the recommendation that in the absence of sufficient data on which to base a scientifically sound decision no change in status of a species should be made.