pdf WP026: The Application of IUCN Endangerment Criteria at the Regional Level of the Antarctic Treaty Area Popular 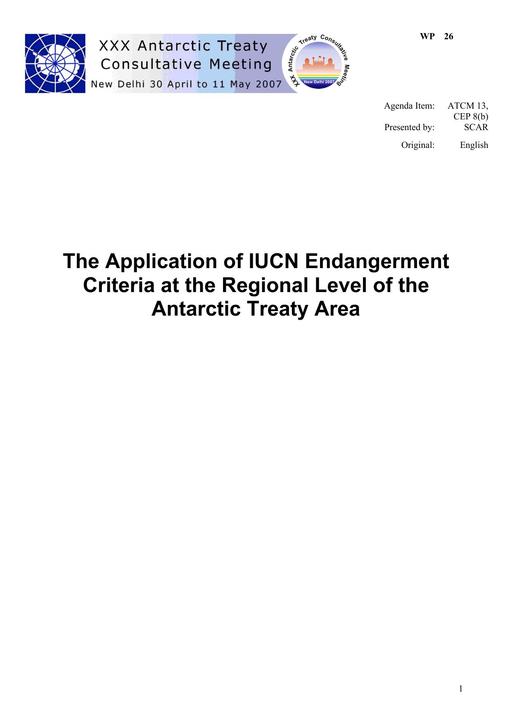 WP026: The Application of IUCN Endangerment Criteria at the Regional Level of the Antarctic Treaty Area

At XXIII ATCM an Inter-sessional Contact Group, chaired by Argentina, was established to discuss the criteria that could be used to designate Specially Protected Species under Annex II of the Protocol. This ICG reported initially at CEP IV through XXIV ATCM/WP5. The Final ICG report was presented as XXV ATCM/ WP8. The advice to the ATCM was encapsulated in Resolution 1 (2002) which noted that the CEP had decided to adopt the IUCN Criteria on Endangerment to establish the degree of threat to a species, requested SCAR to assist in reviewing those species which were classed as "Vulnerable", "Endangered" or "Critically Endangered" (taking into consideration regional differences in status), as well as reviewing those species classed as "data deficient" or "near threatened" which occurred in the Antarctic Treaty Area.

SCAR agreed to begin this process and suggested that it would first assess the species for which there were already extensive data. At XXVIII ATCM WP34 proposed how the IUCN criteria could be applied to Antarctic bird species, initially assessing endangerment for species at the global level. The first case chosen, that of the Southern Giant Petrel, originally appeared to meet the criteria for Vulnerable at a global level, but new data from outside the Antarctic Treaty Area became available shortly before the meeting, and when these novel data were incorporated into extant data, it appeared that this level of threat was no longer justified by the size of the global breeding population. However, the data for breeding populations of this species within the Antarctic Treaty Area showed a clear, long-term decrease in the regional breeding population and the possibility of designating it a regionally endangered species arose. This paper sets out the way in which the IUCN Criteria are currently used at a regional level to provide guidelines for considerations of the regional status of species, and is based on IUCN (2003) procedures.