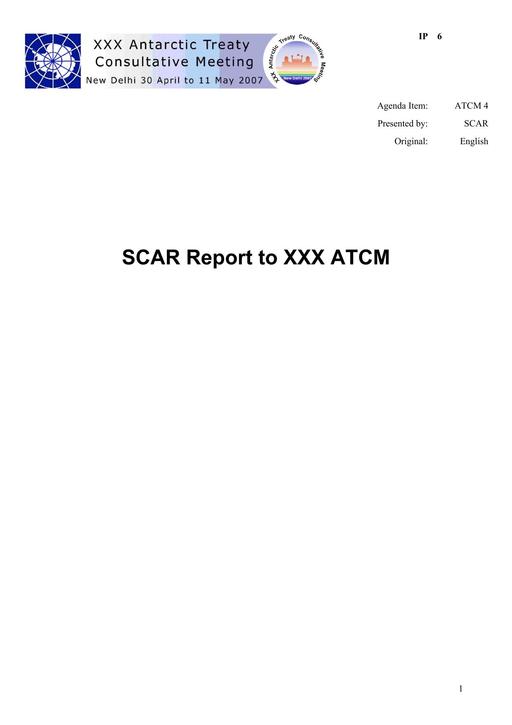 SCAR initiates, develops, and co-ordinates high quality international scientific research in the Antarctic region, and on the role of the Antarctic region in the Earth system. SCAR adds value to national research by enabling researchers to tackle issues of pan-Antarctic scale or global reach. SCAR also provides objective and independent scientific advice on issues affecting the management of the environment to the Antarctic Treaty Consultative Meeting (ATCM); the Commission for the Conservation of Antarctic Marine Living Resources (CCAMLR); and the Advisory Committee of the Agreement on Conservation of Albatrosses and Petrels (ACAP). During 2006, SCAR's main focus was on the XXIXth SCAR Meeting and 2nd Open Science Conference, hosted in Hobart, Tasmania, by the Australian Antarctic Division, which attracted 850 participants.

Through 2006, SCAR continued to focus on research in five main thematic areas: (i) the modern ocean- atmosphere-ice system; (ii) the evolution of climate over the past 34 million years since glaciation began; (iii) the response of life to change; (iv) preparations to study subglacial lakes and their environs; and (v) the response of the Earth’s outer atmosphere to the changing impact of the solar wind at both poles. Particular highlights include the following: