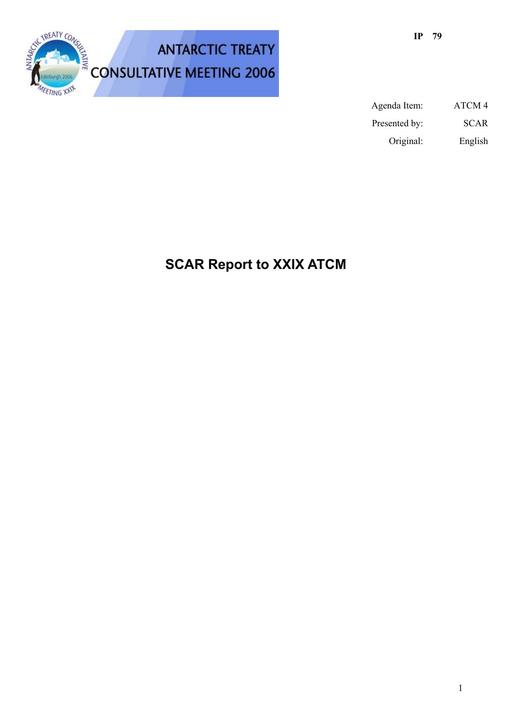 SCARʼs main objective is to initiate, develop, and co-ordinate high quality international scientific research in the Antarctic region, and on the role of the Antarctic region in the Earth system. SCAR coordinates scientific research that adds value to ongoing national research by enabling national researchers to tackle issues of pan-Antarctic scale and having global reach. SCAR also provides objective and independent scientific advice on issues affecting the management of the environment to the Antarctic Treaty Consultative Meetings; the Convention on the Conservation of Antarctic Marine Living Resources (CCAMLR); and the Advisory Committee of the Agreement on Conservation of Albatrosses and Petrels (ACAP).

Through 2005, SCAR focused on ramping up the effort on its five major new Scientific Research Programmes (SRPs) that will be SCARʼs scientific flagships for the next 5–10 years, and published implementation plans for each. They are:

Particular highlights include the following: A major warming was revealed in the Antarctic winter troposphere that is larger than any previously identified regional tropospheric warming on Earth. The largest warming is close to 5 km above sea level where temperatures increased at a rate of 0.5 – 0.7° C per decade over the last 30 years. Numerical models show that the shift in the Southern hemisphere Annular Mode in the atmosphere in recent decades was probably due to anthropogenic forcing. This is the first evidence that the rapid warming on the Antarctic Peninsula is man-made. SCAR launched the Census of Antarctic Marine Life (CAML), a major five-year international project to investigate Antarcticaʼs marine biodiversity. A science plan was published and expeditions are now being organised for the International Polar Year. The inventory of sub-glacial lakes increased to over 140, showing that they are widespread beneath Antarcticaʼs ice sheets. These lakes are believed to help to control ice flow.

Around 750 abstracts have been submitted for SCARʼs second Open Science Conference (Hobart, 12–14 July 2006), which should be very well attended. SCAR programmes were prominent among the proposals endorsed by the Steering Committee for the International Polar Year.